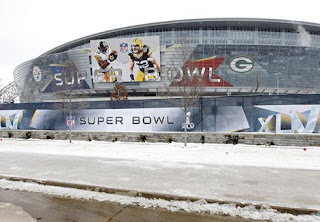 My twitter feed is full of comments and complaints about the snow and ice in Dallas, the city hosting tomorrow's Super Bowl XLV. Headlines like "Texas Needs Late Rally to Save Super Bowl Week" "Super Bowl Hit by Big Freeze" and "Super Bowl: Weather Woe in Texas" try to top each other. Flights were cancelled on Friday. Snow and ice has officially fallen off the Cowboys Stadium roof, sending 2 fans to the hospital.

And the comments and criticism peak with a rally call for the NFL to only consider cities like Miami and San Diego for future Super Bowls.

Talk about snowpocalypse. You'd think the world was about to end because of snow at the Super Bowl. 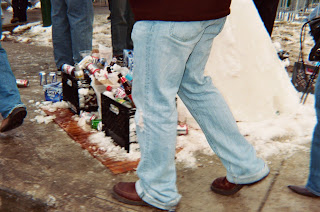 I don't remember any complaints when we Seahawk fans had to go to snowy and frigid DETROIT to support our team in 2006's Super Bowl XL. DETROIT. An economically-depressed, cold, snowy city in early February. I wore winter boots and a parka on the plane, but you know what? I had an AMAZING time in downtown Detroit. No one on our plane or bus complained about going to Detroit and getting around was easy, because you could walk anywhere. Waiting in the security line was like being part of a huge, moving party as you snaked through the gates. {see my pic, above} Even St##ler fans became our besties, with hugs and high fives among complete strangers.

Is Dallas a little bit different? Absolutely. We KNEW there would be snow and cold and everyone was prepared. But SERIOUSLY. You are going to the SUPER BOWL, people in and of Dallas! The most surreal experience of my entire life was the countdown to live air at Super Bowl XL. You'll be in one of the hugest, craziest, amazing stadiums in the world. Who would rather be working on their tan? And by the way, I know y'all can get around town...I've seen the twitpics from the black carpet and gifting suites ;) So let's all relax and get over the icy snowscape. Let the fans have their Super Bowl - they'll make it fun, regardless of snowmageddon.