#12 for #24: a Seahawks Fan Pauses to Consider the Mariners

I'm 100% football fan. So Spring Fever for me is marked by the NFL draft and nervous free agency weeks - not baseball. I mean, let's be honest: there hasn't much fun or excitement involved in following MLB action in Seattle for several years. 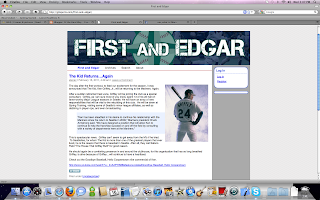 That said, I'm very excited to introduce you to the new M's site on G9 Sports, First and Edgar, and not just because my really smart and baseball-savvy cousin, Elena, is the writer ;)

Today Elena welcomes Griffey back to the team he belongs with - #24 returns to the M's as a 'special consultant' {which sounds not a little mysterious and very lucrative}. And soon she'll be talking Spring Training.

Like I said, I haven't found the Mariners to be exciting in nearly 20 years. When I think about it, I remember being a fan in the 80's - a brief time when Joe Simpson was my next door neighbor and a M's pennant hung on my wall {next to Seahawks ones, of course} and then again in college when my friend Brenda and I would hang out in the outfield yelling until Jay Buhner would turn and look at us {he loved us, he really did}. That was the heyday of the Mariners, and I, like any good Seattleite do wish them luck and a return to the post-season again soon.

Just so long as it doesn't interfere with my Seahawks Sunday at Qwest.
Posted by Candice Caldwell at 3:21 PM