I haven't been able to say anything about losing Jordan Babineaux to the Titans. Frankly, it's been a little depressing, and while the Seahawks seem to be absorbing the Vikings, the Titans are absorbing Seahawks.

Obviously, #12 wishes Babs all the luck in the world. If history is any indicator, we'll probably see him and Hass in a Super Bowl in the not to distant future.

I leave you with the memory of this article by Fieldgulls, with the best title ever: "My Name is Big Play Babs, I Only Do Everything" - written way back in July, those halcyon days when we prayed for the CBA and a training camp schedule. Join me in taking a moment to remember what we used to be.

And now, let's get ready to kick some pre-season Viking arse on Saturday. I'll see you there!!
Posted by Candice Caldwell at 2:10 PM No comments: 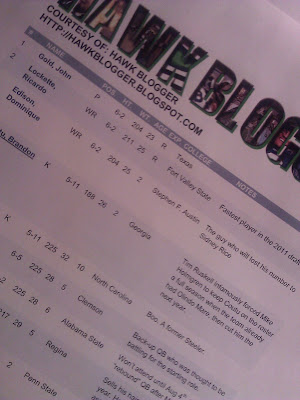 Just printed out the latest Seahawks Roster via Hawkblogger. At 8 pages, it's a bit of a novel, but so funny and way better than the roster at Seahawks.com {sorry, Seahawks.com, you know it's true}. Listed by number and with witty #12-only notes, this is a necessity for training camp in a year with so many new faces. Thanks, @Hawkblogger :)

I'd also like to point out that Mr. 12 the Hard Way is flaking out, which means mini-12 and I will be joined by my nephew and Seahawk-fan-from-N.Carolina...let's call him Curly12. As mini-12 says, "yay! now we get TWO chances to spin for the signings!"

That's my girl!
Posted by Candice Caldwell at 10:45 PM No comments: