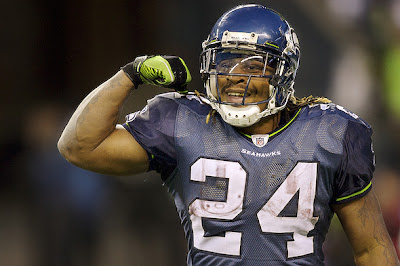 Yesterday was my birthday, so today's Flashback Friday had to be the awesomest...for no other reason than it's the first time I ever remember Seattle snow on my birthday, and because I'm super psyched for karaoke tomorrow night.  That's not a real reason, but when the flashback is Marshawn Lynch's Beast Quake run, any reason will do.  If you need another reason, Lynch wears my number: #24 {also my birthday, and big roulette number, and 'double the 12'}.

In case you've lived under a rock in 2011, 'Beast Quake' is the epic 67-yard run that came at a crucial point in the 2011 NFC Wild Card game against the New Orleans Saints - then defending Super Bowl champs. It showcased Marshawn Lynch in true unrelenting Beast Mode fashion and set the stadium rocking.  Literally.  A "seismic event" was recorded at Qwest Field precisely as Marshawn pushed Tracy Porter to the turf and stormed the end zone. Thus, Beast QUAKE.

Here's how it played out on NBC, but augmented with our own Steve Raible and Warren Moon providing commentary:

I heard this on the radio over and over in the days following the game and EVERY TIME Warren's "Wooooo!" makes me laugh because you KNOW that's the moment Tracy Porter goes flying.  This never ceases to bring a smile to my face, whether I see it or just hear it.  That's the stuff of history, Warren - way to add the color commentary!

I was fortunate to be in the building that night and I can attest that It. was. unlike. any. play. at. home. ever.

...and I was there the night Shaun Alexander scored 5 touchdowns in one half against Minnesota.

AND I was there when Tony Romo biffed the hold on the field goal that would've taken us out of the playoffs.

And hell, I was even there when we beat Carolina to win our very first ever NFC Championship.

These were epic moments as well - euphoric and forever-memorable.  But Beast Quake was something entirely different.  I've never seen the 12th man so collectively shell-shocked and jacked up at the same time.  Mr 12theHardWay was all of a sudden across our aisle in the other section - I dropped my phone jumping around - and of course there were hugs all around.  I think you get an idea from this YouTube gem {though this is rather quiet, if you ask me}:

So Beast Quake is one of those rarities that can never be overrated or overexposed: everyone talks about it, everyone loves it, and for good reason.  There is no way to overstate how truly awesome it is.

Lastly, I'd be remiss to not mention this awesome breakdown of Beast Quake by Hawk Blogger.  Credit where credit's due...and many Seahawks helped make this play happen.