I don't need to tell you all the reasons #12 doesn't want the St##lers to win on Sunday. In fact, I prefer not to speak of them at all.

So most of us in the Seattle area and Seahawks community will end up rooting for the Packers this weekend. I mean, we all know we can beat them any old time we want, and they don't generally cheat, so I don't feel too 'rivalrous' toward them. Do you?

I'm not suggesting you buy a cheesehead {I myself would never wear one - but at least we know their fans are as devoted as #12!}, but here are a few things we need to know about the Pack to fully enjoy Super Bowl Sunday:

1. Founded in 1919, the Green Bay Packers are the only non-profit, community-owned major league sports franchise in America. {that is awesomeness}

2. "Cheeseheads" originally came from a run-in at a baseball game in 1987. Initially meant as an insult from CHI White Sox fans to MIL Brewers fans, "cheeseheads" have been embraced by Wisconsin residents, particularly by Packer fans.

3. It is said that the waitlist for season tickets is now actually greater than the total seat capacity at Lambeau Field and that it would take 100 years to fulfill the requests. 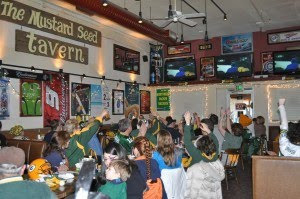 4. Locally, the Northwest Packer Backers is a group of GB fans that has been meeting to watch games each Sunday for over 20 years. They raised $2,000 for local charities this year, which is amazing - and they'll meet at their regular spot {The Mustard Seed in Bellevue} for the Big Game. But don't cancel your Super Bowl party just yet - President Gary Fye assures me they are at capacity for Sunday's game.

5. An old Packers tradition is that kids can bring their bikes to training camp and have their favorite player ride their bike from the locker room to the practice field. {cute}

Lastly, come Sunday, you can show your {temporary} Green Bay support at a couple of local businesses, including:

Blue Moon Burgers, offering deep fried chees curds at their Fremont location
New York Cupcakes in Crossroads {Bellevue} has team cupcakes Satuday and Sunday - get in early before they sell out.

You'd think there'd be more supporters...but you know how Seattle is - we want Seahawks or nothing. ;)

{shout out to fellow G9 Sports ladies at Bitter Orange & Brown for the method of writing the name of the team-which-shall-not-be-named without actually writing it!}

Posted by Candice Caldwell at 11:21 AM