Profile: Meet the Hottest 60 Yr Old in the NFL

Did you catch this clip of Brett Favre and my ALL-TIME favorite NFL Official, Mike Carey on last week's NFL Films Presents? My jaw just about hit the floor when I heard this exchange, and yours will too, so don't stand over anything dangerous while you watch:

Favre: "61. Me?" Heh heh. Carey is the hottest 60 year old in the NFL. Or anywhere, for that matter. Don't believe me? Take a look at a few of the previously-hottest guys born the same year as Mr. Carey, in 1949. {by once-popular opinion, not necessarily mine ;) } 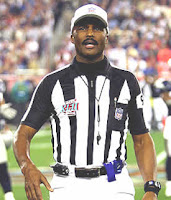 He beats out Philip Michael Thomas {Tubbs}, Richard Gere, Jeff Bridges, and Rick Springfield, for sure. Sadly, Mike Carey won't be officiating this weekend at Super Bowl XLV, that honor will go to Walt Anderson. But since he's been my favorite ref for over ten years, and because I pegged him at maybe 45 {which in hindsight doesn't make sense, since he's been officiating in the NFL for 20 years!}...it's time we learned a little more about what makes Mike Carey tick:

Family ties: brother Don Carey has been a back judge and field judge in the NFL since 1995.
Off the Field: co-founded (with his wife) a company that manufactures ski, snowboarding, and cold-weather apparel and accessories
Rolls like Thomas Edison: Owns or shares 8 patents, including one for "Cat Tracks" boot traction devices