The 2011 NFL Combine starts tomorrow. I might bleed blue and green, but college football doesn't really do it for me, so I'll defer to some more knowledgeable folks when it comes to scouting the new rookie class.

First, check out the Official NFL Combine page at NFL.com

And for the Seahawks specifics, you can't beat Rob Staton's Seahawks Draft Blog 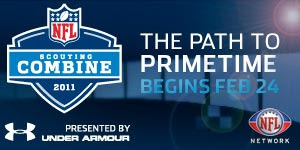 Of course, you can watch the combine live from Indianapolis' Lucas Oil Stadium on NFL Network February 24-March 1.

Scouts and coaches will kick the tires, so to speak, as NFL hopefuls perform running, jumping, and all-around strength-show-offing via the 40-yard dash, shuttle run, vertical and broad jumps, 3-cone drill, bench press.

Have a favorite college player you're rooting for the Hawks to notice and draft this year? Who is it?

{Image Credit: NFL.com}
Posted by Candice Caldwell at 7:16 AM