12th Man - Represent!
No other team can touch what the Seahawks have in #12. You can't tell me any different. The details infused in the new uniforms are worthy of a fan base that has performed epic Waves, had their own number retired, caused earthquakes, and gone to hell (1992) and back (2005-6) for their team. 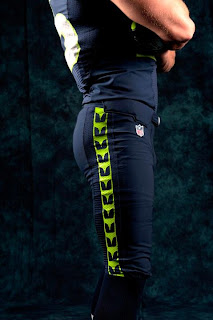 The 12th man emblem is the last thing Seahawks players will see before slipping that jersey on, as it features prominently inside the back collar of each jersey. I'm 100% in love with this detail.

On display for all to see are 12 "feathers" running down the pant legs and around the jersey neckline. Do I love the feathers? No. Have I ever even once thought of feathers in relation to the Seahawks? No. But I appreciate the thought and will grow to love these. I hope.

Away Power
For the first time in the history of the Seahawks, I prefer the Away uniforms to the home unis. This can only help us with our away game performance, with a less-than-stellar record. (Don't get me started on maybe practicing at 10am to get used to time changes. whatevs.)

Color Combo Bonanza
Listen, I like new stuff. I like options. The Seahawks will have plenty of options with jerseys and pants each in 3 colors - officially dubbed (by NIKE), "College Navy, Action Green and Wolf Grey" (gag). Yah, we went from "Seahawk Blue" to "College Navy" and "Wolf Grey"...whatevs.


Neon Details
I love those blasts of neon green. Eye of the 'Hawk. Soles of your shoes. Deion Branch's first gloves. Now the neon outlines our numbers and has even been commented on by major fashion blog, Fashionista.com. But just to set the record straight, Fashionista, the Seahawks were ahead of the neon trend by several years. We roll like that in the PNdub.

Technology Abounds
Slicker, faster, stronger, lighter...it is crystal clear that this uniform redux was inspired by and for the players - and not necessarily the fans. Let me be the first to say that these new jerseys are not going to do any favors for the typical football fan's physique. Ya get what I'm saying? But if our receivers can jump a little higher, or 'backs can slip a little easier out of tackles, that's all good.


The jersey is 20 percent lighter and 50 percent stronger than what teams have been wearing the past 10 seasons. The hydrophobic material also repels water while maintaining what Pro Bowl strong safety turned model called “a clean look.” -Seahawks.com 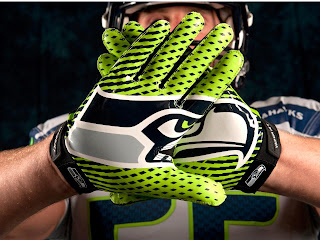 The Gloves
We saw a preview of the new Nike glove design at the Pro Bowl in February. My dad summed it up perfectly when I showed him a picture of the awesome 2-palmed logo design: "someone was told to design to sell a whole shitload of gloves." You got it, Pops. Get me some for Christmas, 'kay?


Next Up:
The BAD
The UGLY

Posted by Candice Caldwell at 10:06 AM