...and then someone said "If you don't have anything nice to say...come sit next to me."

Have a Seat. Let's chat. 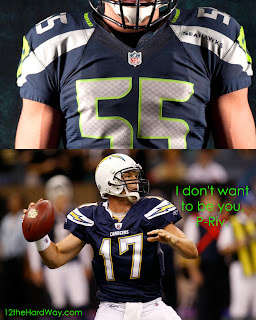 We Are NOT the Chargers
WTF are those stupid white stripes on the chest? The Seahawks have a hard enough time getting noticed on the East Coast - why do we need to basically look like the old school San Diego Chargers, or worse, what my dad said when he first saw the new look (one guess which stupid NFC rival he likened us to - that one with the kicker-who-shall-not-be-named). 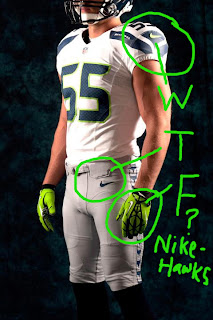 We Are NOT Nike
Seriously, NFL? Seriously, Paul Allen? Are we really giving prime uniform real estate to Nike? Nike Swoosh on the sleeves, Nike Swoosh on the pant. Where did our logo go? Look at the shot without the uniform and tell me what team it's for. THERE IS NO SEAHAWKS LOGO. This better be for prototype purposes, but I can't imagine WHY they would unveil a prototype, so something tells me I'm going to be pissed come August 11 when the uniforms take the field.

Check out this historical rundown of Seahawks uniforms. You'll see that the Seahawk was added as an arm band motif in the Chuck Knox years. You'll also see the various locations of SMALL manufacturer logos. I don't know who Nike slept with to get this real estate, but this is one of the worst ideas ever, if true.

Bring back the Hawk! Do it for Coach Knox.

We ARE the Seahawks...But The New Logo is Weak.
Read here about why it's bad.

Next Up: The UGLY.
Can't take any more? Go Back to The GOOD.
Posted by Candice Caldwell at 10:05 AM