We Wanna See Your Bust, 'Tez 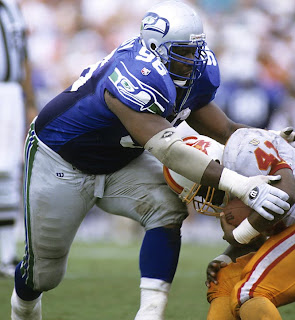 For the third year in a row, Cortez Kennedy is on the shortlist for 'enshrinement' in the Pro Football Hall Of Fame. And you know what they say about the third time...

As DT for 11 years with the Seahawks, Cortez Kennedy spanned the messy era between Chuck Knox and Mike Holmgren with grace and true blue pride. Not to mention a crapload of bad-ass tackles and sacks.

I always thought #96 was perfect for 'Tez - because at 6'3" and hovering around 300lbs, if he got a mitt on you, you might not know which way was up by the time he was through with you - either way you look at it, it's still 96. 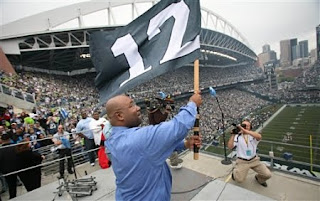 Spending his entire career with the Hawks endeared him to #12, who sent him to the Pro Bowl 8 times. Selected as NFL Defensive Player of the Year in 1992, {yes, that 1992, we went 2-14} there's no doubt that 'Tez deserves a big ol' bust and that fancy Century 21 agent Pro Football HOFer jacket.

VOTE Cortez Kennedy for Fan's Choice. It can't hurt. Vote as often as you like HERE.

Stay tuned. Enshrinees will be announced this Saturday, Feb 5th - just in time for the Super Bowl.

Oh...and Tom Flores is on the ballot too. What the what?