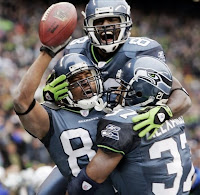 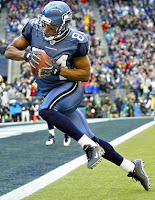 Our boy Bobby Engram, who was a favorite receiver of Matt Hasselbeck, sporting #84 from 2001-2008, retired in 2009. Today it was announced that he's joined the offensive coaching staff...of the 49ers. Crap.

He'll be helping out with the West Coast Offense. Something he knows a little bit about, being part of Holmgren's heroes in 2005.

Which brings me to my conclusion - in my green and blue heart, the entire 2005 Seahawk team, remain true blue Seahawks forever, regardless of where they end up. {except for one josh brown. sorry josh. well, not really.}

And just in case you're hoping it's not true, here's the story on NFL.com, Mike Sando's blog, and wow - someone even updated Bobby's Wikipedia listing already...well done.