Representing the Seahawks in 2011 Pro Bowl... 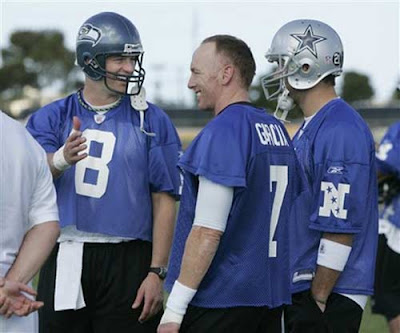 The Seahawks were shut out of this year's Pro Bowl. That really doesn't bother me, because the Pro Bowl is usually the lamest game of the year. {Does anyone really watch this game?}

What IS bothersome is that 30 of the NFL's 32 teams have one or more player going to the game. The Seahawks and the Bucs found no love from the fans in 2010. This would make sense since the votes are in well before the playoffs, and mostly reflect the prior year's performance - not our best, under the befuddled leadership of one JiMora. Still, even Detroit has 2 players on the roster. And they went 2-14 in 2009. Huh.

Even though we won't be represented on the field, we WILL have Sea-Gal Nicole representing the team. Aloha, Nicole! Have fun in Hawaii and show 'em that #12 spirit!

{Image Credit: Deadspin.com - read their hilarious account of what it's really like to to go to the Pro Bowl...you probably won't be surprised.}
Posted by Candice Caldwell at 10:44 AM