The Qwest Era: Beginning of the End

This is the scene direct from Qwest Field last night: 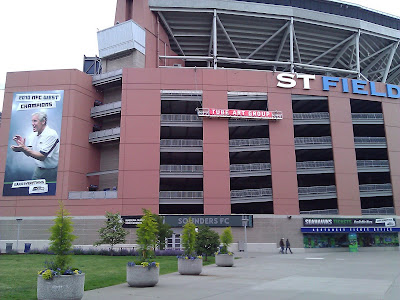 The Qwest Field signs are coming down as we speak.

In case you've been under a rock for the past several months, Qwest has been purchased by CenturyLink and it was {finally} announced that Qwest Field will officially become known as CenturyLink Field. I say "officially" because the #12 population is making great strides toward a mass agreement to call it "Seahawks Stadium" - which is what I will call Qwest Field when I'm not calling it "Qwest".

Corporations come and go and especially in this era of M&As and corporate bankruptcies, we really can't rely on identifying our stadium with any one corporation for too long. It's becoming an absurd idea, really, evident by such costly embarrassments as "Enron Field" in Houston and PacBell-thenSBC-thenAT&T Park in San Francisco.

Then there are the stupid-sounding-names-that-don't-work: O.co Coliseum, Mall of America Field at the Hubert H. Humphrey Metrodome, and Invesco Field at Mile High. Yep, football fans still call those "the Coliseum," "the Metrodome" and "Mile High" {with optional grimace for #12s}

So I say, let's stick with Seahawks Stadium. That's how she was born, and how she'll remain.

...And NO, I don't want to hear about anyone who thinks "Seahawks Stadium" is unfair to the Sounders. Just look up at the 300 seats during a Sounders match. That's why it's Seahawks Stadium.
Posted by Candice Caldwell at 1:32 PM