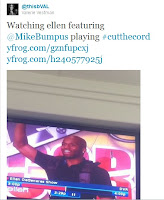 I'm not a regular watcher of Ellen, so it was WAY random today when I had it on in the background and noticed this familiar guy from the audience playing one of Ellen's games, "Cut the Cord". When he said he was "Michael from Seattle" and was a football coach with a shout out to Redmond HS and I was all..."wha? Michael Bumpus is that you on Ellen?" because Redmond boasts a couple of notable coaches {Manu Tuiasosopo ring a bell?}

And to top it off, Michael won the game with his trivia skillz and wit. Way to represent #12!

12Plus:
Official Update on Michael Bumpus from Seahawks.com
Posted by Candice Caldwell at 4:16 PM