Dawning of a new day in 12dom

Its a new day and I can't hear too well, can't talk too well and I've definitely lost a spectrum of my voice, maybe for the week, maybe forever.  More importantly, today I just can't shake the feeling of a significant new moment as a #12. If you've been a 12 for more than, say, 7-10 years, you know the feeling too - something akin to the 'underdog' fighting and clawing to the top and gaining their due. 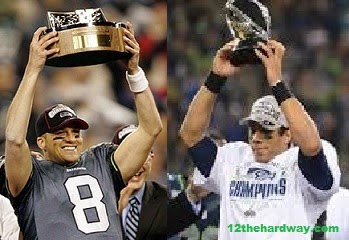 It started at the end of our playoff game in Atlanta last year and it has been building, rolling, and expanding to fill the room and, last night, the entire state. For the first time in my lifelong career as a 12, I had essentially no playoff anxiety this week. Tailgating was all about biding time to kick-off. Halftime was just a moment to give our voices a rest. For a span of the final drive of the game, I wasn't freaking out - mostly because this team has trained me to "3elieve". We GOT This.

So then the final interception. ELATION, of COURSE. But not in the same way of 2005's games. Not even the same as the January 22, 2006 NFC Championship - the one where we pretty much knew by the 4th quarter and I still ended up crying with joy when the confetti flew and Hass HOISTED that  George Hallas trophy. No tears last night, because it was just plain RIGHT. DESERVED. NATURAL. 'OBVI'.

Because this particular group of 53 deserved a Super Bowl from the moment they came together in what was hashtagged a 'Championship Offseason'. Because this is the power of 1-0, I'm In, The Separation is in the Preparation, and #GoHawks. (And that's how you build a fanbase like the 12th man: from the beginning and with shared values, through and through). And above all, Because 12s KNOW what this team is and why we're the underdogs and that THIS is our moment. THIS is our Year.

So welcome to the brave new world, 12s.  It might not be the Hardway we're used to, but it wouldn't be as sweet without all we've seen before.