Tonight I spent a blissful hour an a half in the crisp Seattle dusk standing on concrete (in heels) waiting for Golden Tate to sign my ticket from September 24th's MNF win over Green Bay. I was #240 something in a long, long line of #12s. We knew the chances of Mr. Tate staying past the 7pm cutoff in order to sign our belongings was slim, and yet no one left the line until Golden left the building.

At one point I thought to myself, "who are all these people crazy enough to stand in the cold just to see Golden Tate?"

And then I realized they were all like me. (duh).

Like true #12s, we remained optimistic throughout the wait, and even upbeat when it was declared we were S.O.L. 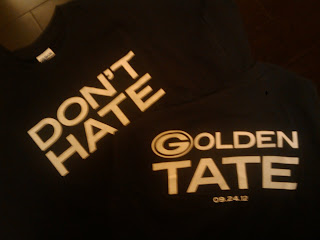 All was not lost, though. I picked up 2 amazing T-shirts from a couple of enterprising young men selling them out of a suitcase...the front reads "Don't Hate" and back reads "Golden Tate," complete with the GB "G" and the date of the infamous MNF romp. (YAH, I said ROMP...EIGHT SACKS.) Also had an awesome conversation with a fellow #12 in line.

P.S> the 2 guys selling these shirts will also be out at the game on Sunday. How cool would it be to have Showtime himself sign this T? Yes.
Posted by Candice Caldwell at 9:31 PM