Yesterday was a tough one. My twitter was a'spinnin' as news came in that Matt Hasselbeck wouldn't be talking with the Seahawks, and then the quick concussions as news of signings and potential signings kept dropping in one of the most active Free Agency days in recent memory.

More on that later.

For now, a few lessons learned yesterday...or reiterated, as the case may be.

1. Matthew Hasselbeck is a stand up guy

2. The Holmgren Era is officially at an end in Seattle

3. Character counts, but maybe not as much as it once did at Seahawks HQ

4. #12 sticks together through thick and thin - a force to be reckoned with

5. Hass will likely go on to the Super Bowl in the not too distant future...as many recently-ex-Seahawks likely do

6. I am going to miss those Infiniti of Kirkland radio spots so much

I'm not quite ready to make changes on my twitlists of incoming and outgoing team players. For now, I'll just let @Hasselbeck's Twitter poignant new profile pic say it all. Thanks Hass, Beck, Matthew, Matt, #8. You deserve the last word and the best of luck. 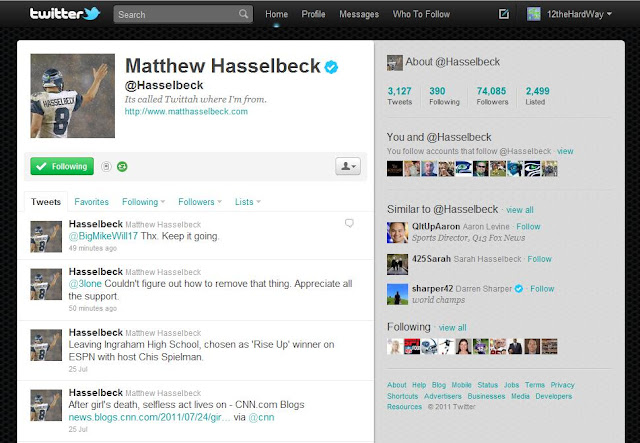 Posted by Candice Caldwell at 8:09 PM